The Graduate Support Program is a very important part of Nativity.   In 5th Grade Nativity Prep makes a 12+ year commitment to our young men.  The 4 years at Nativity as well as support and guidance through both high school and college.  Our Alumni see Nativity as another home to come to where they can talk through problems, celebrate successes and know that the Salesian Brotherhood goes outside the walls of our small school.  Below is a speech a 2014 Nativity Grad gave at In Vino.  In it he shares his fears, dreams and path for an amazing future.

Our Duty to Make A Difference

A Speech By Elijah Johnson at In Vino Veritas

First and foremost, I’d like to say thank you to everyone who came to In Vino Veritas to show support for Nativity Prep, the place that made me who I am today. Anyone who knows me well knows that I have never actually been much of a talker. In fact, I can remember a time—quite some time before I’d graduated from Nativity—when speaking in front of more than a handful of people at a time would literally make me nauseous. I could never have imagined standing up here on this stage  and presenting in front of you all as I am tonight. Yet here I am, and I think, that in a way, that feat alone accurately represents the Nativity Prep mission. It’s more than just the fact that I  and other Nativity graduates whose lives have been changed by this school are able to speak in front of an audience, it’s the notion that we aren’t afraid to be our best selves, and to lead the lives that we never thought were possible before our time at Nativity Prep. Coming from where I come from, you learn from a very  young age not to take things for granted because, in Wilmington,  some kids don’t even make it far enough in their lives to have opportunities like this one. Nativity turned graduating from a prestigious high school like Salesianum, from a dream into a reality. It taught us that we could see more, could do more, and

were worth more than the blocks we were raised on. This reality is not a core class at Nativity—it’s something that is impossible to leave the school without finding. Since the end of my time as at Nativity, I, and many other graduates, have returned numerous times to complete hours of volunteer work. In those hours I’ve learn many things: firstly, that Fr. Brian Zumbrum isn’t nearly as scary as his appearance might make him seem; secondly, that even being four years removed from the school, outside of a few changes of faculty, a new plaque picture, or fresh coat of paint here or there, the spirit remains and; third and most important, that every student in that building has limitless potential. At this very moment there are dozens of hard working, hard playing, dream chasing young men just like me waiting for their time to step out into the world and make a difference. It is our duty to assure that they know they can make a difference and should seize every opportunity possible on their journey to a brighter future. Les Brown once said “Everything a man does for himself, he carries with him to his grave, but everything he does for others will be left to thrive far after he’s gone.” Having said that, I ask all of you: What will you be taking with you at the end of the night and more importantly what will you be leaving behind? 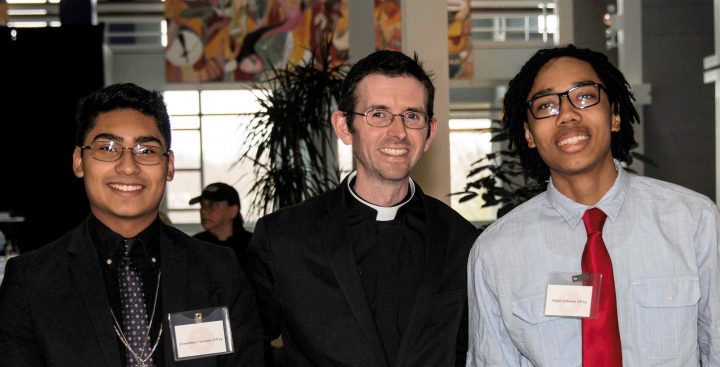